Did you ever look at a bird sitting in a tree or another person and wondered at the separation between you? Well don’t. What you’re seeing is just eye consciousness. It’s the nature of it to separate. The only non-separation experienced is through the formless, the real. Realise this and the rest won’t matter.

So how should we regard that which is labelled awareness? That which points to the knowingness of the moment? In a language which is structured with nouns it’s hard not to think of nouns as things. But awareness isn’t a thing. It’s not separable.

So you ask with awareness, ‘Is it everywhere?’ Well, is the brightness everywhere? Is it in the space between the buildings? We might say it is ‘in potential’ because if it wasn’t it wouldn’t be able to shine on that which it illuminates. 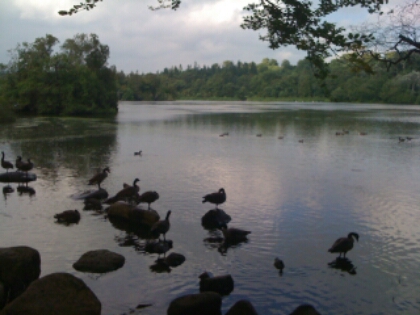 But really does this make it any clearer? Maybe a little but also recognise that what you’re trying to do is to create a clearer thought, a better thought to understand more accurately. This path only runs so far and stops a long way short of seeing or realising truth. We don’t need to get rid of thought, it’s useful in its way. But it’s like trying to escape the atmosphere in a hot air balloon. It can’t take you there.

So this comes back to the noticing, the seeing of this. The more we allow this simple, everyday seeing to arise in the moment, the more we notice. We might be looking for a ‘whole’ but really what we see is separation. This is the way it is. But if we’re trying to see an unseparated whole, then watch this desire arising, just notice this.

Seeing the separation is what is, this is what’s seen. And this is a path we can follow, but rather than look ‘out there’ look ‘within’. Can separation be seen here too? Can we see lots of separate parts and processes? If we can use this, if we can really start to see the parts and not attach to trying to make a whole or something permanent or fixed out of that which is labelled ‘me’ or ‘self’, then we can start to notice the nature of the labelling mind. Its nature is to ‘make something of’ that which is seen, so we notice this tendency.

Letting the unfolding of noticing happen in this way, we reach a point of seeing, where ‘whole’ and ‘separate’ have no meaning, and these thoughts are largely disregarded. Disregarding these thoughts we reach the end of seeking.

4 thoughts on “Hang ups with with awareness and separation”