But of course if I present an answer here, I’m creating another viewpoint, aren’t I? So rather than expect me to answer the question, take what I’m about to say as a pointer. A pointer is simply an invitation to look, that’s all. In any moment everything around us can serve as pointers, as invitations to look and see clearly how it is. The fact that we spend much of our time not looking but resting in thoughts, beliefs and assumptions about what is around us, is apparent in the fixed views and sense of self these give rise to and support. 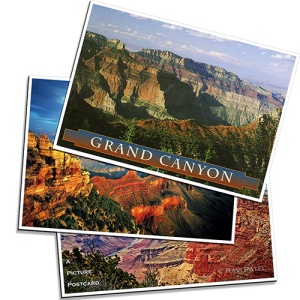 Okay, let me backtrack. Back to original question, can a thought depict or reflect that which appears with sufficient accuracy to be considered true? Let’s take an example. Imagine you show me a postcard of the Grand Canyon. Never one to avoid stating the obvious you say, ‘Look, it’s the Grand Canyon.’

‘No, it’s a postcard of the Grand Canyon.’ I reply, in equal measure stunning and irritating you with my apparent pedantry.

Ignoring your beleaguered expression, I reply, ‘No, that’s what the Grand Canyon looked like when the image was taken.’

Now, it may seem like a small distinction but it’s a crucial one. You could line up a thousand postcards of the Grand Canyon and none of them will really show the true Grand Canyon. They will only ever show what the Grand Canyon looked like – past tense. Since the photos were taken animals have moved, plants grown and changed, the weather has altered, the light is different, there will be small changes to the physical terrain and so on. Even if the image is one second old, that which it depicts has changed.

It’s important to recognise that thought works the same way. The process of reflecting some thing in thought is based on an old image, old data. It’s not an accurate depiction of how things are. It can’t be. To see how things are, we have to set aside thought and look, i.e. to engage with how it is right now, free from ‘thoughts about…’

Again if you think this is just pedantry, you might not be seeing the point(er) that’s being made. The tendency of attention to attach to thought as the basis for knowing truth is the fundamental foundation for the sense of self, world view and conditioning. Until we recognise this tendency and can set aside that which arises in thought as simply a thought, a feeling as a feeling, a sensation as a sensation, we are living in a world of appearances rather than seeing the way it is.

There is nothing wrong with thought, feeling or sensation, we’re not judging, denying or suppressing them, all we’re doing is recognising their nature. In doing so we return attention to the present, how it is right now, and as thoughts, feelings and sensations arise, we don’t attach to these, we see them arise and disappear. We need not engage them or we may choose to but we don’t attach to any of them. They are what they are. When this is seen, seeing is awake.