Sleepless nights are not a thing I’m used to. Normally when my head hits the pillow you can count the seconds till I’m off. So it was a bit of a surprise to find myself losing not one but two night’s sleep last week. The funny thing was I didn’t feel bad about it either physically or emotionally. Maybe I managed to get enough minutes of rest to see me through but I suspect there’s a different reason.

Over the last few weeks I’ve had a lot of energy in the solar plexus area, close to the heart. It didn’t bother me but I could see it was there. Then several conversations occurred which helped shed a light on this and move things along.

A friend who’s a Reiki healer and who knows more about energy than most gave me some insights into what that area corresponds to; things like self worth and confidence. That was pointer. Then I had a wonderful conversation with the abbot of my local Buddhist monastery, who pointed me towards expanding rather than focusing, and that was another important pointer. 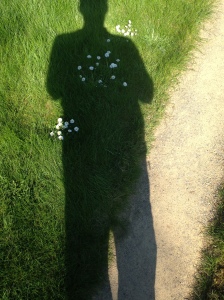 Lastly I read a blog post and had a conversation with a wonderful teacher, Nirmala. I find a lot of resonance in his writings and teachings and it was good to get his insights on the head and the heart. That’s what I wanted to write about today.

When I first awakened it was through following what you might call a ‘head’ path. I was using mind to look and see how everything changes and nothing is fixed and then I could see nothing is actually a thing, really more of a process or expression and then I looked inwards at this ‘me’ and… poof! I realised there was no separate self or in fact any separate ‘things’ in all of this beingness of moment.

But gradually over the next couple of years my focus and my practice has shifted from being about the head, which is useful but a bit dry, to being about the heart. The heart seems to be what connects this human experience to the All. It’s where that connection happens most obviously for me, perhaps because that’s where I’m most tuned in.

I spend a lot of time looking at the experience in the heart and how feelings are registered in the body, watching for the movements, watching the heart expand and open or contract. This helps to highlight where there is still some resistance to what is, maybe based on an attachment to wanting it to be otherwise. When we see this then we can come back to just this; this moment; and expand.

So then what happened was the heart spoke. In fact it spoke a lot and the energy that I had noticed turned out to be a lot about forgiveness. Not forgiveness of anyone else but actually forgiveness of my past actions that were trapped in a story of self going back years. So staying with that, looking at it, seeing it and welcoming it, the energy rebalanced itself.

It ‘nibbana’d’ back to more even state. And so there was suddenly a lot more energy in the system or rather, the energy that was there was more evenly spread. Which felt nice and calm and smooth, but also had the side effect that when I went to bed, the system was far too charged to need anything like sleep.

But what could I do but think, hey ho, it is what it is? We look to see if there’s any resistance and then we allow whatever is to just be; it is this way…