There’s no point in denying Santa’s existence on one level. He’s the picture on a selection box, a lyric in a song, an inflatable decoration, an image on a card, a character in a movie and much more besides. Santa is in a million place. But the point to notice is that the thing that all of these point to, the reality they appear to represent doesn’t exist. There is, in fact, no actual, real individual to which all of these references point.

By the same token, the self is real. The separate self is a feeling, a thought, a name, a form; my clothes, my style, my car, my job, my home, my history, my relationships. The self appears in a million different references. But the thing that all of these point to, like Santa, doesn’t in fact exist. It can’t be found.

The self is not a temporary manifestation, it’s not a fleeting shadow, it’s nothing. There is nothing. No self. What about the feeling? Well, for a start it’s not wise to base our view of anything on feelings, they can be fooled as we all know. But beyond this the simple fact is, it’s just a feeling. And the thought is just a thought. And the labels are just labels. But the thing to which they appear to refer, doesn’t exist. 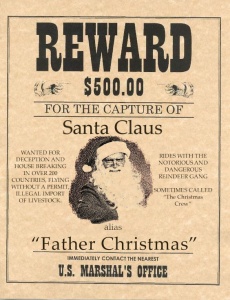 For many of us this takes us into new territory. We can have some sort of initial agreement with the sentiment, but don’t be fooled by that either. The deeply ingrained belief in a self is not so easily shaken for most. You might think it is until someone puts you down and then what happens? You take it ‘personally’.

The truth is, the self thought, the self feeling are born a hundred times a day. Every time we cross the bridge from sensation to wanting or sensation to not wanting the sense of a self has the potential to arise. We go from noticing that’s (not) nice, to I (don’t) want, to a sense of becoming that now separates us from the object of attention. Just like that, voila, duality is born and the rest rolls right along.

That’s where it gets really interesting, not to say tricky. Thoughts of what we might want or not want arise. The challenge is, we spend so much time running in circles of thought that our world is full of expectations and assumptions. As soon as reality confronts us with a different version of events, if we’re not really mindful, fully present, we can react in a way that builds on this duality to create a sense of self: ‘I can’t believe this is happening! Why do these things always happen to me?’

That’s not to say we should live in a world where we like everything and dislike nothing, where we never respond and become some sort of passive, vacant statue. Liking is still liking, the pleasing is still the pleasing and vice versa. But strange as it may sound, we don’t have to let that run to wanting or not wanting. We might still look at a nice cream cake and find it pleasing to the eye. We don’t have to deny it tastes great. But that doesn’t need to lead to wanting one. We can be present and operate from a place where we feel no aversion to it or attraction to it. Same thing with jewellery or other material possessions. Some things look nice, they’re well made and attractive. But that doesn’t mean we have to want them. This isn’t about giving up all possessions and wandering the desert, there is a way to own things without being owned by them, but that’s a balance that not many people ever find.

So there’s a way to live fully in the present moment where we appreciate the things around us, where we see the beauty and we recognise the ugliness, without getting pulled into grasping or needing to avoid. There’s a way to recognise that in this present moment it is this way. Choices happen, responses are made but these are not made based on a story in thought of how it ‘should be’, or ‘shouldn’t be’. They are simply the most expedient response based on the way it is, on seeing clearly. These responses are part of the moment, not separate from it. Just another movement amongst all of the movements taking place that make up the unseparated whole; one vast movement, that’s actually quite awesome if we can set aside our personal perspective long enough to see it.

So this process of seeing clearly walks the line between acceptance and denial. When we get to see clearly we recognise that that’s just a thought after the event. It might serve in a limited way for the purpose of communication but don’t seek the truth in it. The truth is not these words or that thought. It’s in the clear seeing of this as it is. Anything I could add to that statement would take us further away not closer, so perhaps it’s best to leave it there.